Family games are not as popular as regular games. Especially because these types of games tend to be easy enough for kids to play. So we the older gamers just watch and get bored by them. I already know there’ll be an “okay boomer” in the comments.

Rosie’s Reality is not a complete exception to this rule. It’s a family game, so there’s a lot of instructions, bright colors, and silly jokes. However, it’s not just a mindless puzzle game.

The game starts in the year 2048, in a world where robots are part of humans’ everyday life. That is until the global control center gets hacked. Robots become a threat and no one suspected this would happen. No one except for Will Smith. That last part isn’t true, but am I the only one who thought of I, Robot? Maybe I am a boomer.

Even without Will Smith, humans have a backup plan named Rosie, a rescue robot that’s not affected by this update. Now, it’s Rosie’s job to rescue the other robots, with your help of course. You’ll guide Rosie through several puzzles, rescuing malfunctioning robots and earning stars along the way. 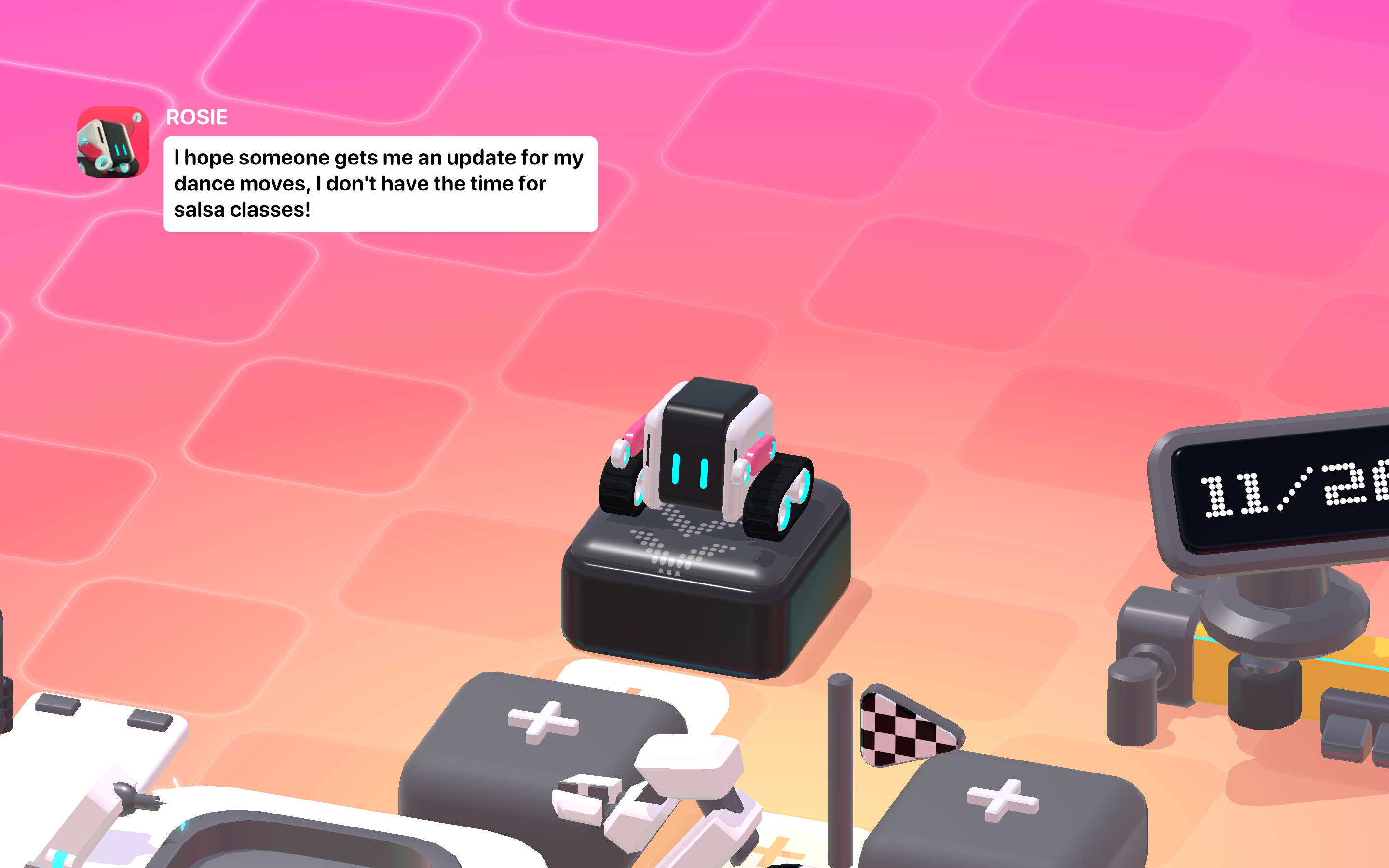 Rosie’s Reality is a puzzle game in which you’ll create a path for Rosie to follow. You’ll use blocks that make her do things like change her direction or jump. There are also power-ups that you find on the levels. These power-ups help Rosie do things like move faster, but you can only use them once after you obtain them.

Rosie’s Reality has two game modes: Single-player and multiplayer. In multiplayer you go online to find other players to solve puzzles with. The single-player mode has 3 worlds, each with its own number of levels. Your objective is to help Rosie reach the goal. Sometimes you’ll also have to fix malfunctioning robots that are spread across the level with a special chip.

At every level, you can get 3 stars. The number of stars you win depends on how fast you finish a level. There’s a timer on every level that starts to run as soon as you start the level and it doesn’t stop until you reach the goal. If you run out of time you lose the level.

The timer adds another level of difficulty to the levels. The puzzles are not as easy as you might think. You’ll have to manage your resources, time the other robots’ movements and create a correct path. All this with the pressure of a timer. 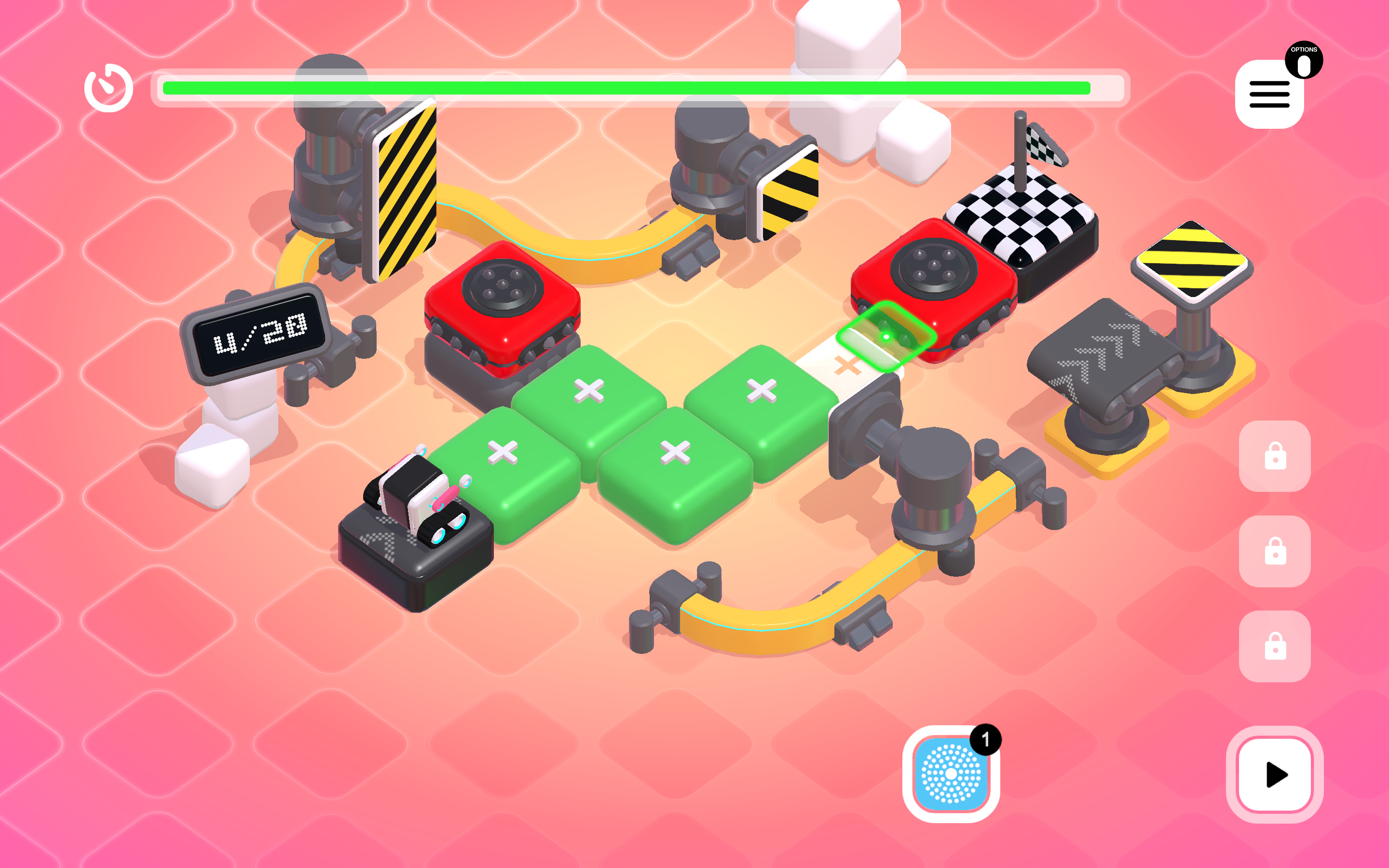 You’ll need the stars to progress through the game. To collect all three stars, you’ll have to learn how the mechanics work, and there’ll be some trial and error every now and then.

However, repeating levels turns frustrating because of Rosie’s Reality’s unskippable animations and cutscenes. They’re nice and all, but you’ll get tired of them after a while. Everything has animations, and when you restart a level with a cutscene, you’ll have to go through it over and over again. You’d think that we’d have skip buttons by the year 2048.

One thing that makes you put up with the animations is that they’re so well made. The robots’ movements are cartoony and smooth. Plus, the bright colors and overall friendly environment make Rosie’s Reality a great game in the visuals department for kids and grown-ups alike.

There’s an AR mode that uses your device’s camera to place the puzzles in the real-life world. This is a neat feature that keeps the game interesting and dynamic. Instead of just using your fingers, you’ll have to move around to see the level from different perspectives.

When you’re not using AR mode, you’ll move around the level by sliding your finger to the left and right. You’ll control the blocks by tapping on them and then tapping in the place you want to place them. Depending on how big your device and your fingers are, you might make some mistakes when taping on a square. It’s not that big of a deal, but it does take time away from you.

Despite its looks, Rosie’s Reality is a family game that the whole family can actually enjoy. Its friendly visuals and cheerful narrative, combined with challenging puzzles and easy-to-learn gameplay will keep players of all ages engaged in this colorful adventure.

We pride ourselves on delivering quality, long-form articles like this one instead of the SEO-driven click bait that is slowly taking over the internet. Unfortunately, articles like these rarely generate the traffic (and as a result, the ad revenue) of listicles, cheat guides, and other junk.

Please help us continue producing content like this by supporting TouchArcade on Patreon, doing your Amazon shopping by first visiting toucharcade.com/amazon, and/or making one-time contributions via PayPal.

NOTE: Rosie’s Reality is available on mobile exclusively as part of Apple Arcade, a premium gaming subscription service from Apple. Without being a subscriber to Apple Arcade you cannot download and play this game. Apple Arcade is $4.99 per month and does come with a free one month trial, you can learn more about it on Apple’s official website or by visiting our dedicated Apple Arcade forum.