More details about Borderlands 3 were revealed during PAX West, focusing on what you’ll be doing once you wrap up the campaign.

During the Gearbox Main Theatre Show (where a PC port of Borderlands 2 VR was also announced), Gearbox revealed more details about both endgame content and post-launch support for Borderlands 3. They’ve been detailed on the game’s official site, but we’ve also rounded up the announcements here. This follows up on the details we already learned out of Gamescom, where Gearbox showed off the new Proving Grounds and Circle of Slaughter modes.

When you beat the campaign, you unlock Guardian Rank, which allows you to incremendally upgrade the stats for all of your Vault Hunters. This is a twist on Borderlands 2’s Badass Rank system, but now you’ll be able to stack powerful buffs on those of those bonuses too – you unlock Guardian Tokens as you play which can be spent across Enforcer, Survivor, and Hunter skill trees to become more powerful.

You’ll need to be strong for True Vault Hunter Mode, which is essentially New Game + with stronger enemies and better loot. You share stats and equipment between this mode and the normal campaign. Then there’s Mayhem Mode, which allows you to play the game with Mayhem Mods enabled, greatly increasing the game’s challenges. There are three Mayhem levels, and you can unlock some wild loot in this mode. 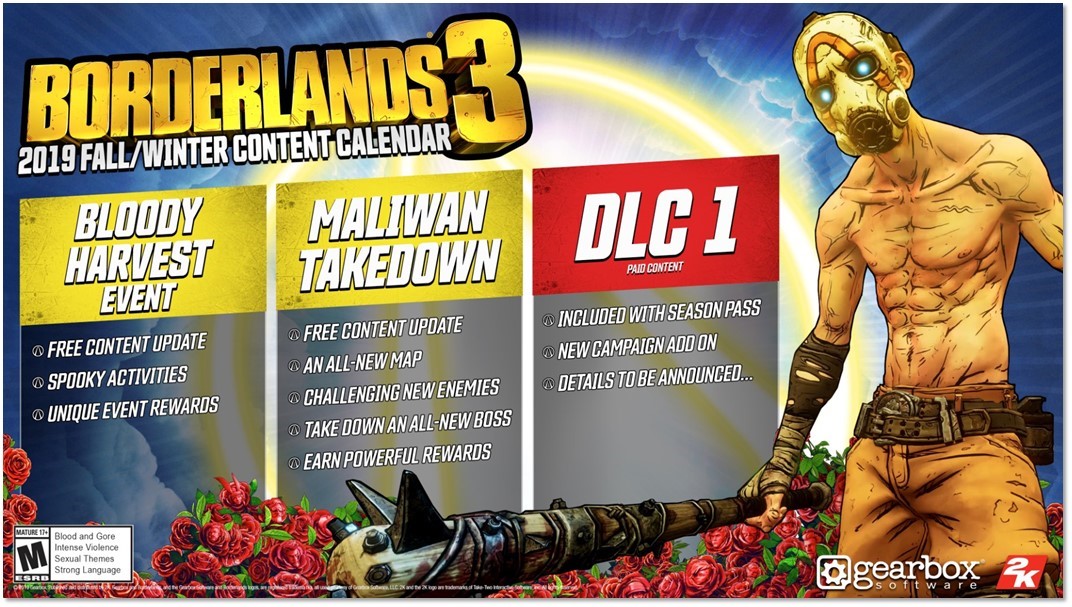 Gearbox also announced a schedule of free content drops (above) leading up to the first DLC drop by the end of winter 2020 (February). The ‘Bloody Harvest’ event sounds like a Halloween event to us, and Maliwan Takedown sounds like a hefty free update.

Borderlands 3 is shaping up to be a pretty tremendous game. It releases on September 13 for PC, PS4 and Xbox One.