Google Search Will Soon Help You Improve Your Pronunciation 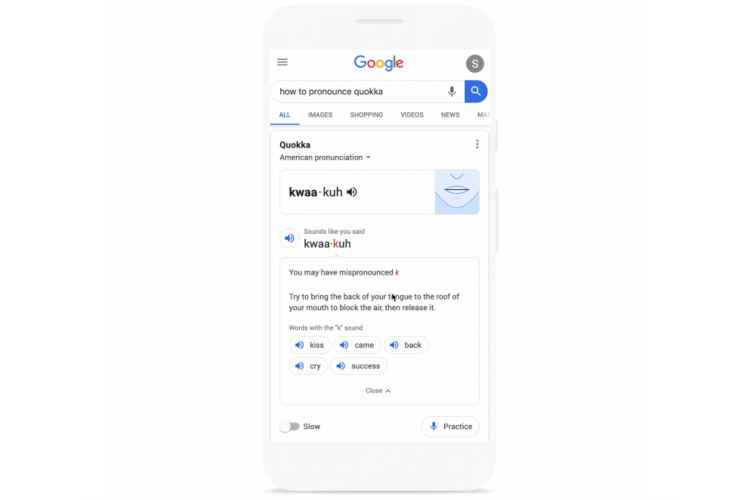 Pronunciation is a big part of speaking a language well, and Google is now trying to make it easier for users to learn how to pronounce typically hard to speak words with feedback based on machine learning analysis of their speech.

Basically, whenever you search for something like “how to pronounce quokka”, Google will show a new “practice” button in the card that displays the pronunciation for the word. Tapping on this will enable your microphone and you can say the word for Google to analyse. It will run machine learning analysis on your pronunciation and point out syllables you may have mispronounced, along with detailed information on how to properly say the word whose pronunciation you’re trying to learn. Take a look at the GIF below to get a better understanding of this feature:

Apart from trying to be your pronunciation helper, Google is also improving translation results and definitions on its search engine with the help of images. So, if a user asks Google to translate the Spanish word “Naranja”, the results will not only show the english translation for the word (“orange”) but it will add images of oranges to the results to give a visual aid to the user. The same applies for definitions on the search engine, with Google showing images of the things that people are searching for on the website.

Since the feature uses machine learning, one can expect it to get even better over time as it learns over time, but that remains to be seen. I tested out the pronunciation feature, but it wasn’t showing up on my phone so far, but let me know if it’s coming up for you guys, and what you think about it.