Researchers at the Swiss Federal Institute of Technology in Lausanne have put a specialized camera to use in a cool new experiment, capturing super-slow motion video of a light beam moving through a carefully-arranged set of mirrors.

We’ve shared some of incredible high-speed camera achievements in the past, including the recent breakthrough that allowed scientists to capture a staggering 70 trillion frames per second. But even with these advancements, we haven’t seen any footage of a beam of light actually moving through the air, and that’s exactly what Edoardo Charbon and his colleagues have captured here.

The video above is part of a research paper titled “Superluminal Motion-Assisted 4-Dimensional Light-in-Flight Imaging,” in which Charbon and his colleagues explain how they were able to use a “time-gated megapixel single-photon avalanche diode camera” called MegaX to capture a high-resolution “light-in-flight” video.

Although light isn’t usually visible in flight, the researchers were able to capture the photons that scatter off of particles in the air as a laser pulse moves through it, using machine learning to predict the trajectory and capture the light path.

You can see the light path in this figure we pulled from the full research paper: 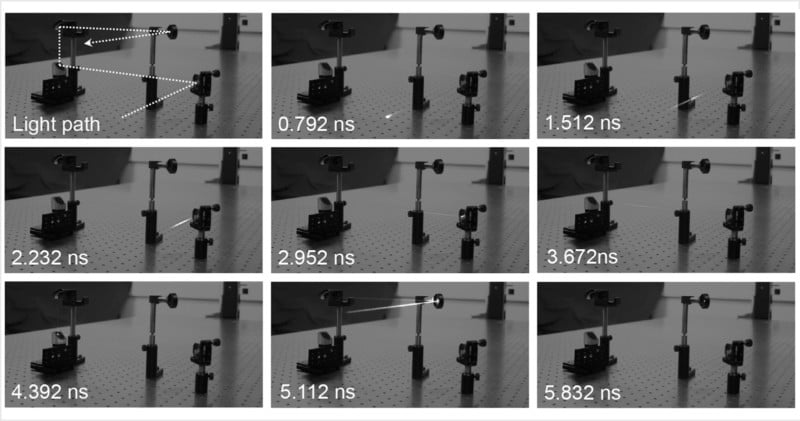 And here’s a screenshot showing the light beam mid-flight: 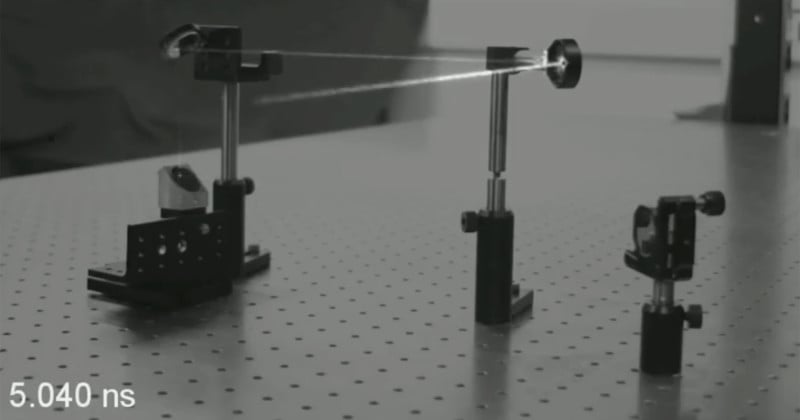 Speaking with Digital Trends, Charbon explains how the camera uses an electronic shutter speed of just 3.8 nanoseconds to capture light as it propagates.

“Subsequent laser pulses are used, opening the shutter with increasing delay, so as to follow the propagation along its path,” explains Charbon. “Thanks to the large number of pixels and the fast shutter, one can see the light propagation in multiple shots without moving the camera and without superposing the images to images taken with other cameras. Everything is done on MegaX.”

The result is “the first 4-dimensional light-in-flight imaging.”

To see this breakthrough for yourself, check out the video up top. And if you want to dive deeper into how this works and what exactly they’ve achieved here, you can read the full research paper at this link.