The New SD Express Card Explained: Everything You Need to Know 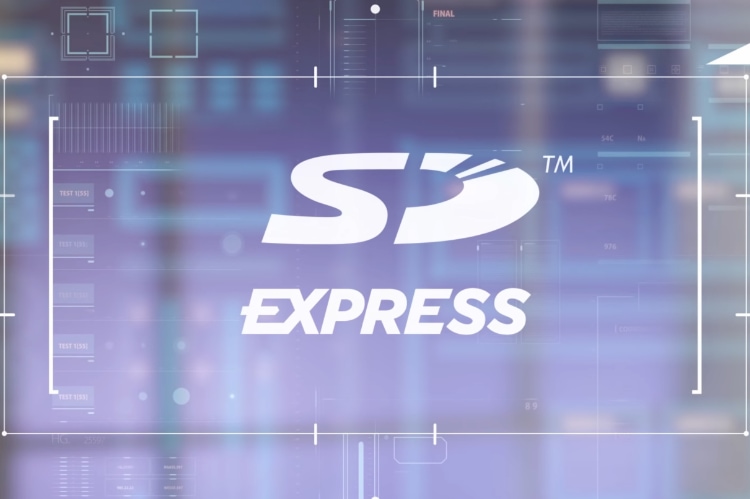 After a period of two years, the SD Association – a consortium that sets memory card standards – announced specifications for the new SD Express card in its 8th release. The headline feature of the SD Express card is its ability to transfer data at 4GBps which is really amazing. Apart from that, dual lanes have been incorporated in the SD Express card to deliver gigabyte speed. So if you are curious as to how the Association managed to increase the transfer speed by four folds then you have come to the right place. In this article, we take a detailed look at its version history, technical aspects, architecture design, and more. Further, I have discussed what this new memory card can bring to general consumers in the end. So without wasting any time, let’s go through the article.

If you are unfamiliar with the various standards of SD cards then let’s brush up the basics first. SD cards have multiple bus interfaces. By bus interface, I mean the design of the connectors that establish a connection with the peripheral device. The names of the bus interfaces are based on their speed capability. For instance, the first bus interface was literally called “Default Speed” which could read and write at 12.5 MB/s. The next release was called “High Speed” which peaked at 25 MB/s. After that, UHS (Ultra High Speed) became the standardized bus interface for several years following the release of UHS-I, II, and III. The latest UHS-III supports transfer speed up to 624 MB/s.

So to sum up, SD cards have finally entered into the Gigabit race and it would be interesting to see how it changes the market dynamic for consumer device makers. But before that, let’s go ahead and study how the new SD Express card leveraged the PCIe and NVMe technologies to nearly quadruple the transfer speed from its last-gen bus interface.

During the first SD Express card release, the consortium had implemented the older PCIe 3.1 interface and NVMe 1.3 protocol. But now, they are using the well-known PCIe 4.0 interface and the latest NVMe 1.5 protocol. Sure, PCIe 4.0 interface is not the latest one, but it’s one of the most widely-adopted bus interfaces by electronic makers. Apart from that, PCIe 4.0 maintains backward compatibility and interoperability with all the older PCIe generations so that is great. Apart from that, another reason why the new SD Express card has seen such a massive uptick in transfer speed is because of its dual-lane architecture. I have discussed the architecture of SD Express Card in detail below so let’s go through that. 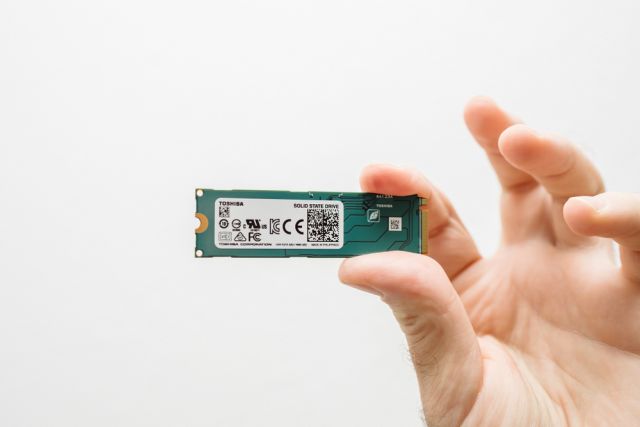 3. The Architecture of the New SD Express Card

Before we dive deep into its architecture, keep in mind, the SD Association has not announced a microSD card with the PCIe 4.0 + NVMe tech. For now, it’s only limited to the full-sized SD memory card. With that out of the way, let’s move to the architecture. The new SD Express card has three configurations:

In Figure 3 below, you can see that it uses the same pins and connectors from the older UHS-II interface. However, the differential interface is based on PCIe 4.0 and features a single lane. As mentioned above, it can go up to 2GBps. Moving to Figure 4 and this is where things get interesting. As you can see, there is an additional third row of pins to support two PCIe lanes. It can be used for implementing both PCIe 3.1 and 4.0 interfaces. Apart from that, for dual-lane cards, an additional pin 19 has been added for providing more power (3.3V). Moreover, Pin 18 has been reserved for optional 1.2V supply planned for future use. 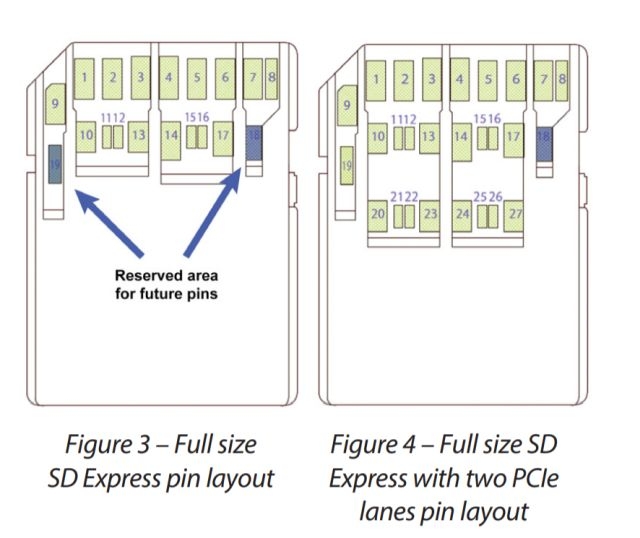 The best part about the new SD Express card architecture is that the first row is based on the UHS-I interface. It means that, despite being a modern and extremely fast memory card, SD Express will still be backward compatible with billions of existing SD host devices. You will be able to plug the SD Express card and use it on older laptops and card readers without having to buy a compatible SD card reader. However, keep in mind, you won’t get the touted Gigabit transfer speed.

4. What Does It Mean to General Consumers?

The new SD Express card is a big leap in the removable storage segment. It can be a game-changer for creative professionals who shoot high-resolution content such as super-slow-motion video, RAW continuous burst mode photography, 8K video, 360-degree video, and more. In fact, the SD Association has said that “this new protocol allows SD Express memory cards to serve as removable Solid State Drives (SSD)“. From the technical point of view, the SD Express card has really become an SSD at this point. However, we will have to wait and see how the consumer device makers react to this new development. The Association has also pinned its hope on Android device makers indicating that SD Express cards can now be used as embedded memory in place of eMMC or UFS storage. 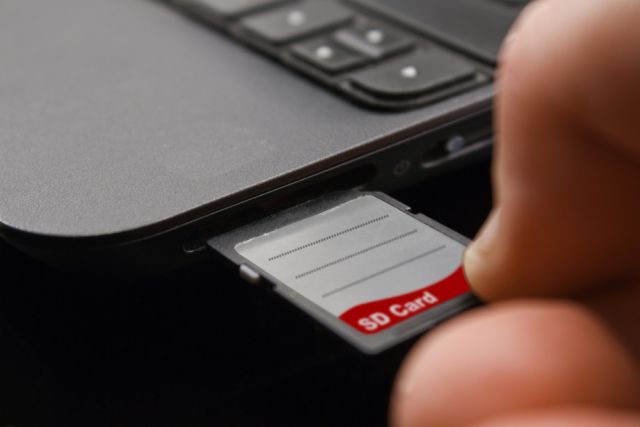 However, the big issue with SD cards, in general, is that they consume too much power in comparison to UFS or eMMC. Traditionally, SD cards need 3.3V to initialize the card and 1.8V to perform operations. In contrast, UFS needs 0.2V to 0.4V to initialize and perform operations. On top of that, the new SD Express card comes with additional pins for power supply so it’s unlikely that SD cards are going to replace eMMC or UFS in smartphones. Having said that, it would be awesome, if laptops would bring back the SD card slot – not just for plugging removable memory card, but to extend the storage.

It would be the best solution and reduce the hassle of replacing the SSD by opening the innards of a laptop. Moreover, the new SD Express card supports storage up to 128TB (theoretical, I know!) so you would get ample capacity in a small footprint with stellar read-write speed. To sum up, the new SD Express card can be a great replacement for PCIe-NVMe SSDs. 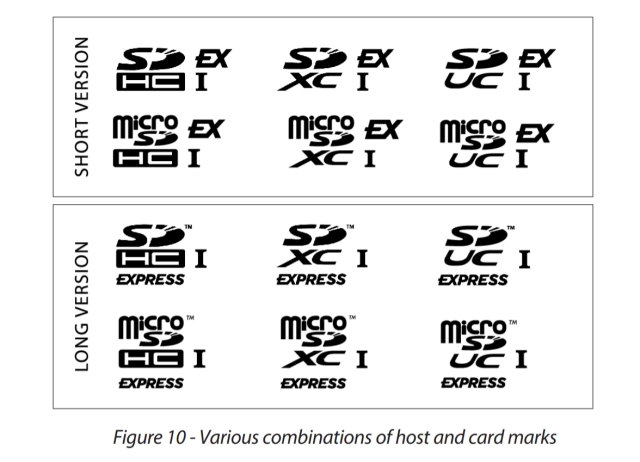 Now coming to the crucial question – when can you get your hands on the ultra-fast memory card? Well, it could take more than a year for memory card makers to implement the latest specifications, so late 2021 would be a safe bet. However, since there are so many versions and standards of memory cards, it can be confusing for a user to pick the right SD Express card. The SD Association has released the trademark for the SD Express card and it would appear similar to the above image on the memory card. As it supports all three SD card families, you can pick anyone from SDHC, SDXC, SDUC. SDHC cards are available under 32GB and will have transfer speed around 2GBps. Next, SDXC cards can have storage up to 2TB and can go up to 2GBps.

Finally, SDUC cards will offer you maximum storage of up to 128TB and transfer speed of up to 4GBps. Keep in mind, all these numbers are theoretical so the transfer speed can significantly change depending on the host device. You can find transfer speeds for various card-host combinations from the below image. 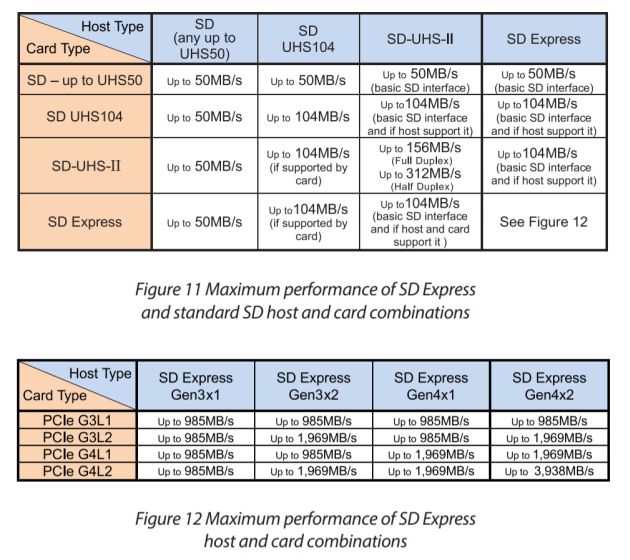 So that was all about the SD Express card. We have discussed a bit of history, its technical aspects, architecture, and some pointers for general users to pick the right memory card. The card is broadly targeted at creative and professional users, but I think it would be a great solution for people who want to extend the storage on their computers in a hassle-free manner. Anyway, that is all from us. If you want to learn more about this subject then you can go through the whitepaper published by the SD Association. And if you found the article informative then you can comment down below and let us know.