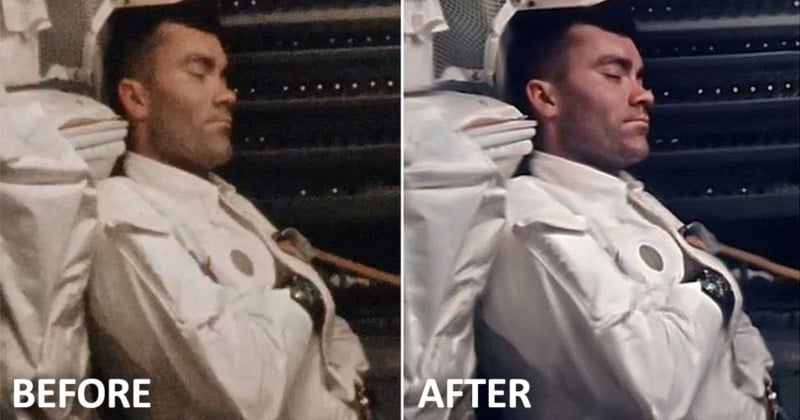 NASA’s ill-fated Apollo 13 million launched 50 years ago this month, and it had to be aborted 56-hours-in after an oxygen tank exploded. Now an imaging guru has created new high-definition views of the mission by stacking low-quality film frames.

UK-based imaging specialist Andy Saunders took 16mm film captured during the 3rd moon landing mission and found different but similar frames to stack in order to increase image quality. Slight differences were addressed by realigning parts of the frames, and Saunders also corrected color, contrast, and the fisheye effect created by the wide-angle lens used in 1970.

“It all hinges on the principle that stacking images improves the signal-to-noise ratio,” Saunders tells BBC News. “As the noise in each frame is truly random, then stacking multiple frames of the same scene on top of each other and averaging out the levels of each aligned pixel has the effect of identifying and reducing noise whilst maintaining signal (the signal will be present on all frames).”

In case you’re curious, here’s a compilation of the 16mm footage captured by the Apollo 13 astronauts during their mission:

Saunders is known for his HD images of the Apollo 11 mission and astronauts Neil Armstrong and Buzz Aldrin. You can find more of his work and follow along with his projects over on Twitter at @AndySaunders_1.

Image credits: All photos by NASA/Andy Saunders and used with permission.