You Can Now Schedule Tweets Straight from the Web App 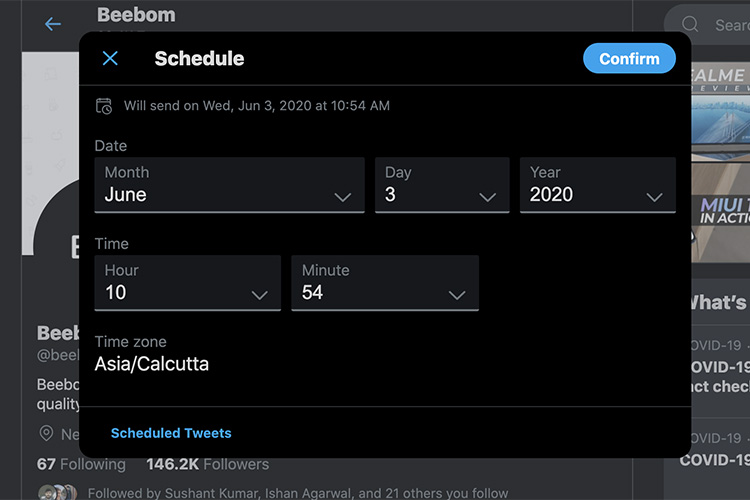 Twitter has today started rolling out a tweet-scheduling feature to its web app. The feature makes it possible for users to schedule tweets without having to use third party services, or the Twitter-owned, but not very popular tool Tweetdeck.

If you want to schedule tweets, you can simply start composing a new tweet on the Twitter web app. At the bottom, you should see a calendar icon with a clock face in it. Clicking on it will let you select the date and time for posting your tweet.

Up until now, users depended on third party services for scheduling tweets. Tweetdeck also offers a tweet scheduling feature, but it’s not something a lot of people use very frequently. It’s definitely nice to see Twitter bring in a tool like this to the regular web app for the platform.

Apart from scheduling tweets, Twitter is also adding a new ‘drafts’ feature to Twitter web. With this, users can choose to save their unsent tweets as drafts and finish them later. This is a great way to ensure you don’t lose a thought if it comes at a time when you’re not ready to tweet it out. I don’t have access to the feature on the web app yet, so this might be a limited or phased roll out. However, according to a tweet by Twitter, the feature works pretty much how you expect. You can click on the ‘cross’ icon while composing a tweet and you will get the option to discard it or save it as a draft.

Not quite ready to send that Tweet? Now on https://t.co/fuPJa36kt0 you can save it as a draft or schedule it to send at a specific time –– all from the Tweet composer! pic.twitter.com/d89ESgVZal